The House on the Rock

Do you know about The House on the Rock? A structural feat of engineering. A '60s party haven. A bizarre maze of sights and sounds.

I visited The House on the Rock for the first time recently. It was amazing to see... everything on the property. But, it got me thinking. There's so much contained in one "home" (I use that sparingly, as most of the items are now housed in separate buildings). How could one person have so much? Is this a collector's dream? A person with hoarding behavior? Something in between?

By definition, a collection is the act or process of collecting; a group of objects or works to be seen studied or kept together.

By definition, a hoard is a supply or store of something held or hidden for future use; a collection or supply, as of memories or information, that one keeps to oneself for future use. 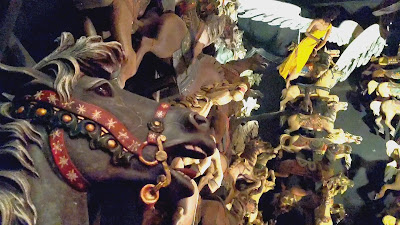 So, by definition a collection is a hoard. Interesting. But, I think there's more to it than that. If Alex Jordan, who built The House on the Rock, didn't open his home to the public, earning admission tickets along the way, he wouldn't have the fortune to continue to build on his property, to buy and make more things to store in more buildings. He needed the money. He already had the space. Surely, if he kept amassing the dolls, model ships, Asian artifacts and instruments, but stuffed them into bins and shacks in the yard, he would have been named a hoarder. So, do resources like space and money solely create a collection? Not exactly.

Why did Alex Jordan keep creating, keep finding and buying more? Was it because he had already built this business for Midwestern lookie-loos who would only come back if there was something new to see? Or, was it because he wanted more? Because he couldn't stop?

A lot to think about. There may be a fine line between collecting and hoarding behavior. Is The House on the Rock a collection to view, like a museum? Or, is The House on the Rock one man's hoarded clutter, put on display? The best way to find out is to see it for yourself. There's really nothing else like it.