I don't know if you make resolutions for the New Year. Sometimes I do, and sometimes I don't. It's usually something manageable and realistic. One year, I resolved to drink more water; another it was to have better posture. I'm sure I could have done better with them, but I know I'm much more aware of how hydrated I am and how I stand or sit now. I think that counts.

A lot of people resolve to become organized after the New Year. That can be a big resolution. That can include going through everything you own, reorganizing it and then keeping up with it. For a whole year.

If you've struggled with organizing in the past that's going to be pretty overwhelming. 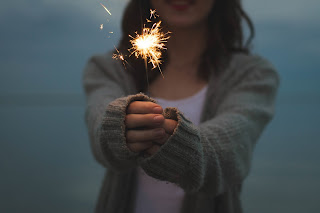 Make it more manageable, more realistic. Instead of saying you'll generally just be more organized, try to be more specific. Are you mostly hoping to get your paperwork and bill paying under control and paperless? Do that. Are you hoping to finally go through your entire wardrobe and figure out your own style? Concentrate on that. And, should you get through your goal in a month or two, then you've got 10 more months to tackle what you want to organize next!

It's easier to wrap your head around something specific and make a plan of attack for a particular goal.

We're one week in to the year. How are you doing so far?